As mentioned in yesterday’s article, the Euro would probably benefit if there were no surprises by the US Federal Reserve and this indeed was the case as the Fed announced to market just what everybody was expecting.

The US central bank announced it will start tapering its bond-purchase program later in the month at a monthly $15B, which was inline what the market was expecting. Later, in his press conference, Fed president Jerome Powell gave an upbeat assessment of the economy although he emphasized that the start of the tapering process has no links to a rates lift-off.

The news was beneficial for the Euro as any mention of a rate hike would have seen market participants pile into the US dollar on the basis of a higher yield.

As we enter today’s trading session, the Euro has given up all of yesterday’s gain after the release of the latest factory orders from Germany which hit the market at 1.3% against analysts’ expectations for a number of 2% and show business conditions in Europe’s largest economy have some way to go regarding recovery after the worst of the Covid 19 pandemic.

Other news to watch today regarding the EUR/USD currency pair is the release of the initial job’s claims figure from the US which is a key indicator of the US employment market and will set the stage for tomorrow’s release of the Non-Farm payrolls figure that is expected to create significant volatility in the currency pair. 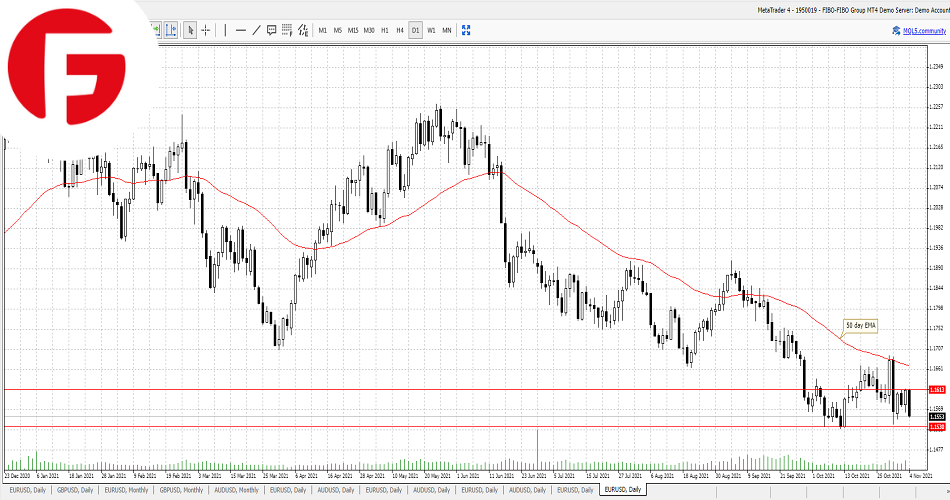 From a technical perspective, the Euro has found a new resistance level over the past 4 days at the $1.1613 mark, and this will be tested today with the news surrounding the initial jobs claim figures from the US.

The main reason why there was no talk of rate hikes in yesterdays meeting by Fed President Powell is because the US central bank wants to see more improvement in the jobs market before beginning the process of lifting interest rates.

History shows, that if the initial jobs claim figure comes in positive, it is followed by a strong Non-Farm Payrolls number, and this will really hurt the Euro.